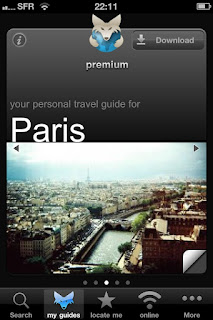 Tripwolf, a company based in Vienna (Austria), offers a wide range of city guides (over 100) for the iPhone and, more recently, also for Android smartphones. I downloaded a few of them, both free and premium (4.99$ or €3.99) and here are my impressions.

Flush design of the App. Screens are well organized and are completed with large photos. Each city has its own "cover page" with a representative image and access to its content.

The navigation bar includes only five (quite large) icons, with the search function (leading to a list of available guides), the "My Guides" button with the TripWolf icon, a GPS-based geolocalization service, online/offline status and a "More" button. The points below the image show the number of guides that the user has downloaded so far and are directly available with lateral scrolling of the cover page.


The information button in the upper left corner leads to the list of guides you have already downloaded. From the cover screen the user can also access a download page, where he can download maps, texts and/or images of the city guide.

The image above is the one of a premium (pay) version of the guide. The free version is called "preview"and has a slightly different color in the background. It is useful to notice that some city guides exist only in one version, usually full and free. I recently downloaded the guide for Palma di Mallorca (but only after I visited, again, the city) and discovered to my surprise that it was the "premium" version, although it was free. Here goes the image of a "preview" guide: 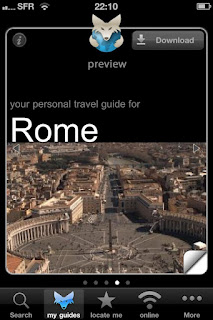 The main difference between the "preview" and the "premium" version consists of the number of data entries: only a limited number of attractions, hotels and other categories are shown.

By clicking on the image (or the lower right corner) the user will go into the menu of the city attractions. 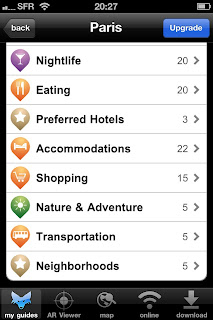 The information is well organized and easily accessible through the list. Once the user quits the cover screen another navigation bar appears with icons that access different functionalities, including augmented reality, maps, online/offline and the download section. Strangely enough the "Plus" icon disappears. If you haven't yet purchased the premium version you'll get a reminder through the "Upgrade" button in the upper right corner. The opposite corner leads you back to the cover page of the guide.

When you have chosen a category from the list you will get into another list of spots: 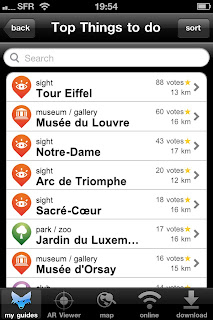 The "Top things to do" list contains the main attractions of the city (also identifiable with their categories, like museums, parks, etc.), the number of votes they received from users and, in case you have been geo-localized, the distance from your current position. You also get a search bar to find specific objects in the list. Another interesting feature is the possibility to sort the attractions on different criteria such a distance from your position, rating, categories. 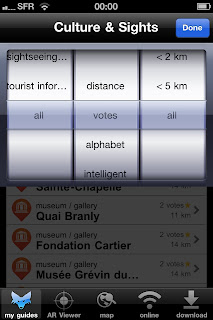 When the user clicks on one of the attractions he reaches a content page like this one: 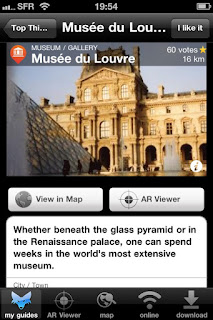 On the lower right corner of the photo the user can access photo credits by clicking on the information button, represented by an "i" in a white circle: 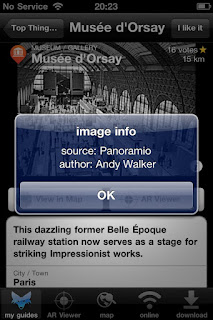 Catalog
Tripwolf has a implemented a good catalog system, with easy access to available city guides and already downloaded guides (either "preview" or "premium" versions). You can access the list either though the search button in the navigation bar or by swiping the city covers screen to the right (the first screen being always the list).The list presents the cities and countries in alphabetical order: 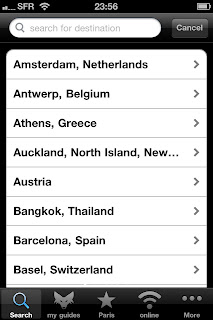 By clicking on one of the titles the system asks to confirm whether you want to download the free version or the premium version of the guide. 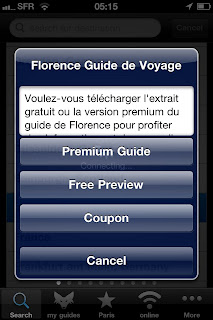 Incidentally it will also ask offer to redeem a coupon: 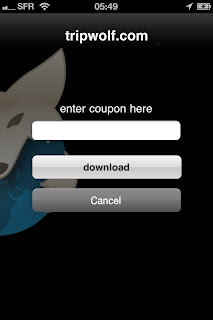 You can also see your titles in the form of a single list by clicking on the information button on the upper left side of the city cover. 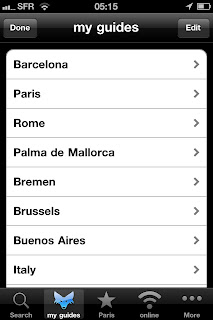 From this screen you can manage the list of your guides by clicking on the "Edit" button. This will lead you to the following screen with the ability of removing guides you already downloaded. 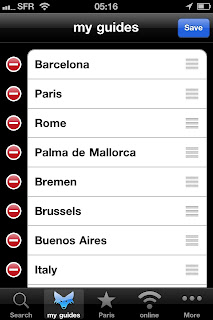 Tripwolf is based on in-app purchases, but still the name of each guide features on the itunes app marketplace. The first download will allow to download the generic app with the management of titles and other services.

Mapping and navigation
One of the best things about Tripwolf (and comments by users are often enthusiastic) is the ability to download city maps for free. This way when you travel to a city you can use the map and do not need to pay (possibly) high roaming charges to access maps. Of course you do not have directions and cannot search addresses, but still you can move around quite easily. Also the street level is not the highest you can get and some names will not appear. 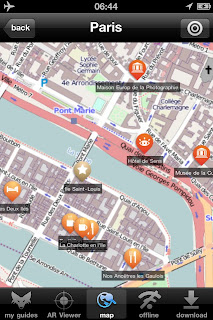 The map will show all entries that area available in a specific area. You can click on them to go to the description. If you downloaded a preview version the number of shops and attractions visible on the city map will be limited. We would have liked a way of sorting out what you are actually seeing on the map or even being able to just view the map. Another app, mTrip, has a feature like this.

Sometimes locations of the guides are beyond the limits of the downloaded maps and can only be traced on a map when the user goes on-line. 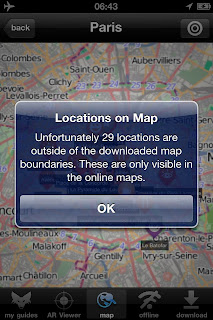 You can be located on the map by pushing the upper left button. 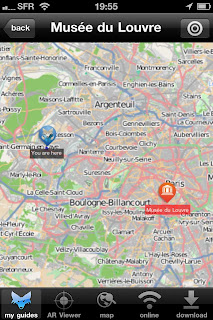 Maps are based on Openstreet. The good thing about the system is that the on-line / off-line maps are perfectly integrated. The transition from downloaded and, hence, embedded, maps in the app to on-line maps is seamless.

Having the ability to download the city maps with the free version of the guides, allows users to better manage their hard drive memory on the iPhone and other smartphones. Just remove the city guide and the maps that have been downloaded will go as well.

Tripwolf also offers the use of augmented reality, or AR, services (for general information on this topic, please check the following wikipedia entry). I am not a fan. In my view it is a typical wow effect. As it is today, you will use it once just for play and never again. Maybe the technology will evolve in the future and become more useful depending on the user cases.


Online/Offline control
Since Tripwolf may require sometime to access the Internet to display data (in particular in maps) the app offers the ability to block 3G access by clicking on the dedicated icon on the navigation bar. When the off-line option is selected the app will only go on-line if the iPhone is connected to a Wi-Fi network: in this case, whenever the app needs to access the Internet via a wireless network, it will ask the user to confirm whether he wants to use wireless networks (and eventually pay roaming charges). 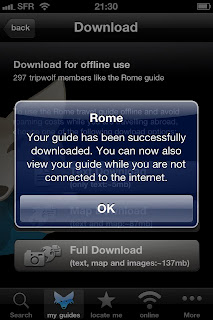 Social and Feedback functionalities
You can become a member of tripwolf and be able to leave comments and rate single attractions in the city guides. From time to time when you launch the app, the system will ask if you want to become e member.  You then access a screen to register yourself: 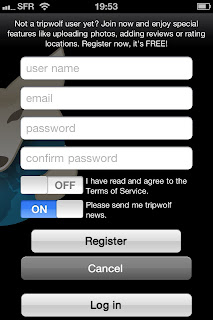 From the More menu you can also invite friends to join tripwolf. Tripwolf also announced that they are adding facebook sharing functionalities.


Content
While the app is well designed and the ergonomics works pretty well, the content may be a little short of what one could expect from a city guide. The information on restaurants, shops and hotels is database driven and contains just basic information and, maybe, comments by other users. Still you can use it. But what is really missing is a description of the attractions that are listed in the city guides. So far, the text is limited to a few lines. I wonder why Tripwolf did not include at least a link to a wikipedia entry of each attraction. This is also a source of complaints by some users.

Conclusion
Overall, Tripwolf is an interesting well conceived tool that offers a lot of information (in the premium version) as well as freely downloadable city maps for many cities around the world. Its major flaw is the lack of detailed descriptions of the attractions.