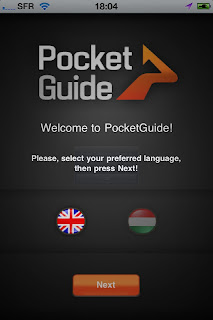 Pocket Guide, a Hungarian company, offers a fresh approach to mobile city guides. The guides cover about 20 European cities with 150 tours. According to the company's web site the texts are written by professional guides and tested by their own employees. Pocket Guide claims about 50,000 monthly downloads (not clear whether these include also the free versions of the app). The guides are available on several platforms: iOS, Android and Nokia's OVI. The guides cost €2.39 per tour or €4.99 per city bundle (which include, depending on the city, from three to twelve tours). Previously the tours were offered at higher prices.

We downloaded a few of their guides and share our first impressions based on the iPhone app (version 4.0).

Design
The design guides is straight and colorful: the guides project an image that may be entice the young and technologically curious users. An introductory screen is simple and presents the app language choice (limited to English and Hungarian).

The splash screen consists of a combination of two large scale photos with young couples (again a hint that the guides are geared to the young). 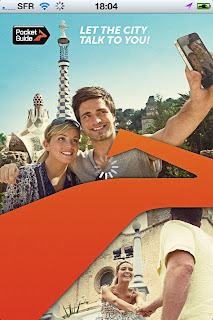 After that the user arrives on a list of cities covered by Pocket Guide. The design is simple and easy. You can also chose to view the guides you have already downloaded. 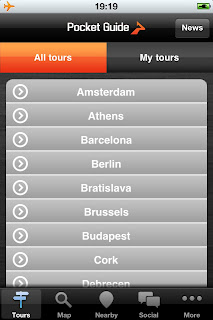 And if you had canceled a tour to free some space on the phone's memory, you always can restore them later. 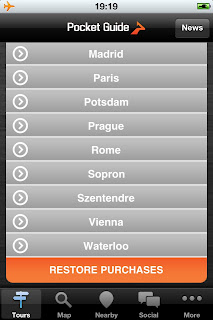 The navigation bar includes icons that access functionalities such as maps, geolocation with nearby available attractions, sharing and the usual "more" menu. The upper right corner has a "News" button and the center of the bar has the logo and the name of the app.
When you click on a city in the list the  pages opens to show the available tours. For each tour the information included here indicates the duration of the tour, the distance from the location of the user (we were in Paris, so over 800 km away!), the rating by other users, the title of the tour, a photo and a brief description. When the tour has been purchased the selected ones will carry be marked with the word "installed". 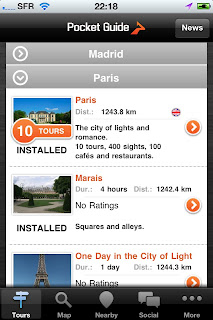 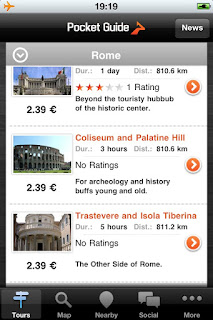 The tours of a city are also offered in a bundle at a convenient price. 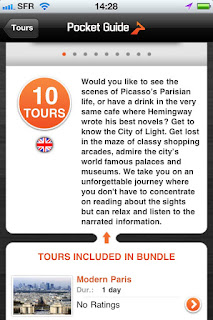 By clicking on a orange-colored  arrow the user will enter the specific tour. The introductory page presents a photo album, the title of the app and the purchase button (in App purchase) with the cost of the single tour.
This page also contains a general description of the tour as well as practical information such as the duration, length and distance, list of highlights, starting and ending points, the best time to go and a suggestion on were to make a pause (for instance a cafe).
From this page you can get also directions on how to reach the starting point of the tour (push the "Navigate to" button) or directly enter the tour ("Start tour"). 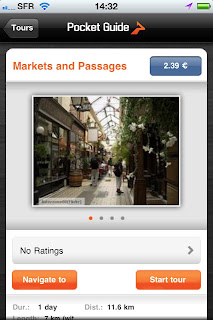 Depending on the city you may also review the tour on a quite spectacular 3D aerial video that uses Google Earth. 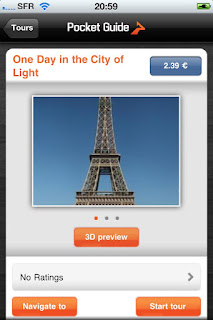 The 3D show starts with a satellite view and then gets down and flies around in the city skies. The name of the monuments on the itinerary appears on the 3D image. 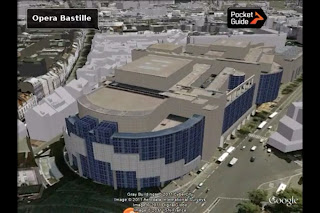 In some videos the aerial imaging will be enriched with brief photo shows of the attractions that are listed on the itinerary. 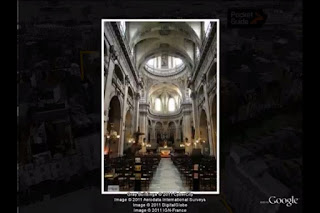 When the user enters a tour, he will directly access a map with the itinerary. If he hasn't purchased the tour, a pop-up box will appear warning him that the tour is locked and that only a few points are described in full, the other audio descriptions are cut after a few seconds. 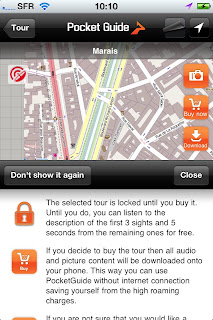 Also, the user may decide to download the tour prior to his trip even without buying it. Once there, if he wishes to purchase the tour he only will need to perform the purchase and he will not need to download the content and incur expensive roaming charges. 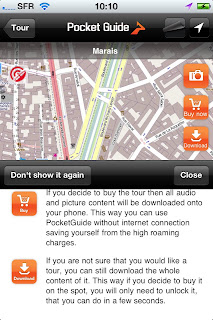 Another alert will briefly pop-up to tell the user that the system will automatically start audio when it gets close to an attraction that is included in the tour. The user can also decide not to see the alert in the future. 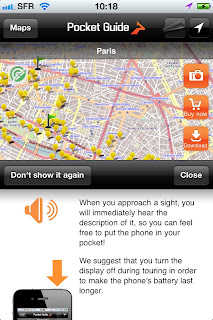 The map (apparently based on Openstreet, although no indication appears on the app or the web site) is relatively detailed. Again, just like in other mobile guides, if the user has downloaded the map with ore without the purchase he will be able to use it as a reference to walk around in the city. Given the level of resolution not all street names are reported. The user will see in first place the starting point (with a green flag) and a light blue trace on the road will highlight the itinerary. Main points of interest are indicated with an orange box and a number. Other attractions that are on the itinerary are indicated with a yellow point. Other points of interest are shown on the map (restaurants, etc.) 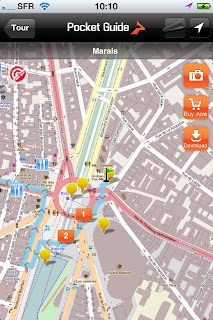 When the user clicks on one of the icons or gets close to it her device in the pocket (with the software on hold) an audio will start with small photo show. All without leaving the map! At every turn the user also receives short voice instructions. 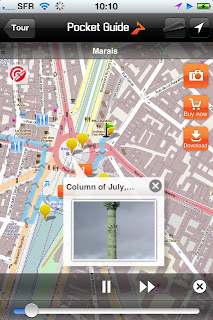 By clicking on the photo the system leads to the description of the monument, a few photos and the text being read. The user can continue listening to the audio and scroll through the page to read the text. 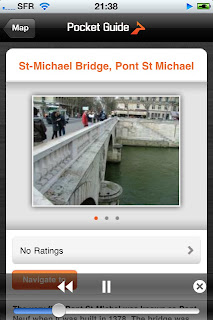 When the user hasn't purchased the tour, the icons on the screen may present a lock, which implies that he hasn't access to the whole content of the guide. 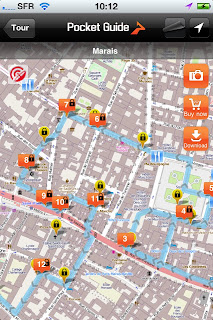 From the map he can buy the tour, download the content or take photos, which he will later be able to see at home in a personalized 3D tour. A symbol in the upper left corner of the map indicates whether the user is on line or not.
As we mentioned earlier the map will also include other POI. The user can decide which will be shown on the map via the following menu: 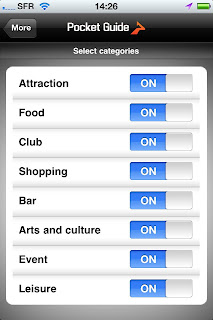 Restaurants and other commercial points if interest are briefly introduced. 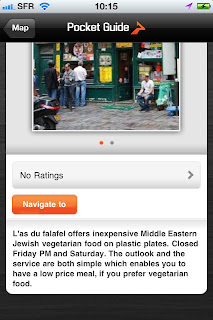 When clicking on the Map button in the navigation bar in the initial screens of the app, the user will be brought to a list of city maps and when he chooses one the map of the city with its itineraries will appear. 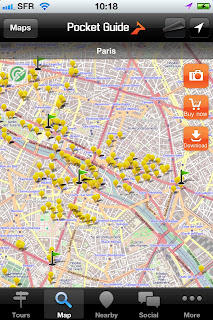 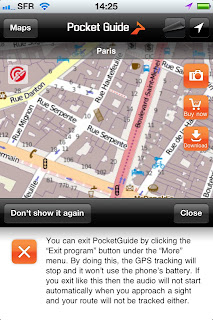 Except when showing videos, the whole app works only in portrait mode. This makes sense if you consider that the user will mostly use it during a walk. A landscape orientation would be more useful in other circumstances.

Sharing
The features in this section are quite remarkable. The  app works mainly with facebook and allows users to share POI, photos and even create a whole 3D video with their own tour and photos.


Here are some of the menu screens used to build your own itinerary. 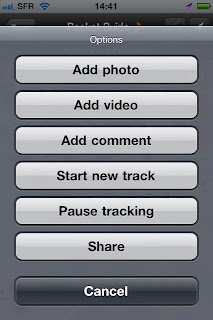 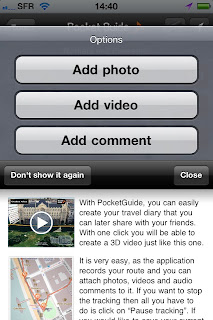 The app allows you to see 2D or 3D videos and photos created by other users. 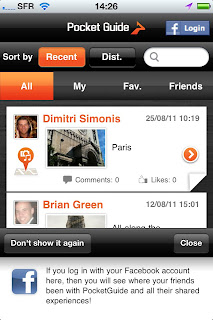 However I am not sure that I would repeatedly use it. I may once or twice, but then the whole thing requires quite some work in not always perfect conditions.


Another functionality of the app accessible from the main screens allows users to see which attractions are the closest to their position. Unfortunately, when you have downloaded the main app with the list of the cities, and you have switched off for a while the GPS, it is not easy to locate yourself in the city where you are and you are instead assumed to be in Budapest! I tried several things to locate myself in Paris, but with no success. A bug maybe? Or a little confusion by the user? 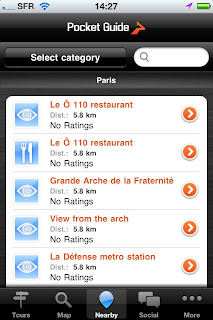 Content
Pocket City indicates that the content of the guides is written by professional guides or other experts. Which is good. However after reviewing the content offered we have the sense that more could be done here. The description of the single attractions is very short (even shorter than the usual all city paper guides) and somehow the visitor doesn't get the real story from the city. And this would be the main purpose of any guide, or wouldn't it?

Conclusion
The app is technologically interesting and has some candies (especially the 3D). Social sharing features are strong. Ergonomics is good but allows a limited use. However, in my view, the app lacks a little on the side of the content.

To learn more visit the web site of the company www.mypocketguide.eu